What was the most useful thing your kids have learned during lockdown?

A blog by Ruth Eagle, parent and former teacher. 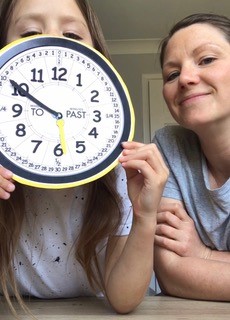 It hasn’t quite been the structured, focussed-yet-fun and harmonious ideal most of us hoped for when schools closed on 20th March.

But there are a few things I’m really pleased to say she’s mastered without being directed to by her class teacher.

She’s now a blur on two wheels since she graduated to a bigger bike when all this began.

By following an online program, she’s almost as quick as me at touch typing.

But most useful of all, is that she’s now able to tell the time. 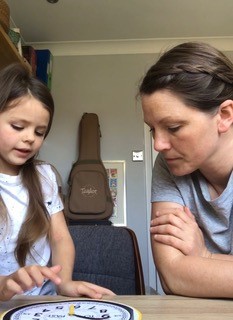 As an ex-primary teacher, I know how difficult it is for kids to learn to tell the time.  It’s a process that starts in year one and continues well into key stage two.  At the start of lockdown, I put it at the top of my list of things we could try tackling together.

Trawling the internet for suitable resources, I found the printable teaching clock from EasyRead Time Teacher.  After printing and cutting out the clock face and moveable hands, then sticking them on card, we were ready to go.

What I like about this clock is the extra information it gives.  As well as the hour numbers, it shows the minute numbers around the edge, the past and to sides, as well as o’clock, half past, quarter past and to. 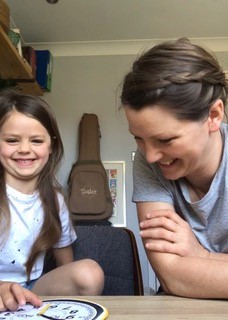 Most clocks, like the ones used in schools, show the hour numbers and divisions every five minutes. It’s complicated for children to count in fives, then ones, to work out how many minutes past or to it is. They get the two sides of the clock muddled up. They get the hands muddled up. Then they’re just getting it before it’s time to move on and start a new maths unit. So it’s back to square one months later, when time’s back on the timetable again.

I was intrigued by ERTT’s ‘3 steps to telling the time’, which was printed on the same sheet as the clock.  The company claim that children can learn to tell the time in one lesson by following the steps. I was sceptical, but tried them out on my daughter nevertheless.  They go like this:

To our mutual amazement, she read the time straight away.

We tried another one and it was just as easy. There was a moment of silence as I tried to work out whether it should be that easy while she looked shocked that she’d found such a simple short cut.

We moved the hands to a few more positions and repeated the three steps, sure to find a glitch at some point. But a glitch was not forthcoming. It’s a fool-proof method and I still can’t work out why more schools haven’t adopted it yet.

My daughter was fizzing with a sense of achievement as she ran off, brandishing her clock, to show her Dad.

We’ve stuck the clock on the fridge and refer to it all the time.  I make times on the clock for her to read or shout out times that she has to make by moving the hands. She likes copying the time from our kitchen clock and making it on her printed one.

Talking about quarters and halves came up naturally and I could see that she was gradually building up her understanding of how clocks work.

There were a few joyful light bulb moments. One of which was working out on her own that once the minute hand reaches 30, the minutes start counting backwards as the hand moves towards o’clock again.

I know that self-initiated discoveries like this lead to much ‘deeper’ learning than those prompted by a teacher.  I’m glad she’s got to grips with time in her own way and at her own pace.

Our daughter is now the proud owner of a real ERTT clock, prominently displayed on her bedroom wall. She knows what time she’s going to bed and what time she wakes up.  She and her little brother do timed 1-minute challenges – possible only because, unlike many kids’ clocks, this one has a hand that shows the seconds.

But I’m sure most parents would agree there are downsides to children knowing how to tell the time.  Parents hold more cards when their little ones are oblivious to the time. Fancy getting the kids to bed earlier than usual? Forget about it.  Saying you’ll play schools in five minutes, but it’ll actually be 20? That won’t wash either.

But on balance, the confidence and sense of control that comes from understanding time is worth losing a little downtime for.  And if I really need it? Well the hands can be adjusted…